US Indian mango shipments greenlit for 2022

Indian mango growers and shippers are welcoming the decision to export good volumes of mangoes to the United States this season.

On Saturday, the Department of Agriculture and Farmer Welfare (DAC&FW) and the United States Department of Agriculture (USDA) reached an agreement to implement a 2 Vs 2 Agri on food access issues. i.e. transfer of inspection/surveillance for Indian mangoes and pomegranate and market access for pomegranate arils. of India and market access for American cherries and American alfalfa hay. Mango shipments are allowed to begin this month while pomegranate arils are approved from April 2022. Alfalfa hay and cherry exports from the United States also begin at this time.

This is good news for Indian mango exporters. For two seasons now, the fruit has been largely absent from the US market following the interference of COVID-19 with exports. As Kaushal Khakhar, CEO of Kay Bee Exports noted in an article last year, US mangoes could only be shipped under the USDA pre-clearance program in which a USDA inspector comes to India, supervises the treatment and pre-authorizes it. In this way, there is no risk of non-clearance and it is a practice that has not occurred since the emergence of the pandemic.

In working to make way for customs clearance, a number of options to enable shipment of the fruit have been explored. While posting a USDA inspector to India was one approach, another was to irradiate the fruit after it arrived in the United States. “But it has limits. If the mangoes are inspected before irradiation and found to have a problem, you’re stuck with that product,” he says. Khakhar also notes that irradiation centers can only be found in two US cities. “So you would only gain about 10% market access.”

Way forward
A third option, one that has been agreed upon between the two countries, is the “transfer of supervision” program. This allows India to ship fruit by having the mangoes irradiated in India with an Indian inspector before they arrive in the United States. “So there will be no pre-clearance and there will be post-arrival inspection,” Khakhar said. 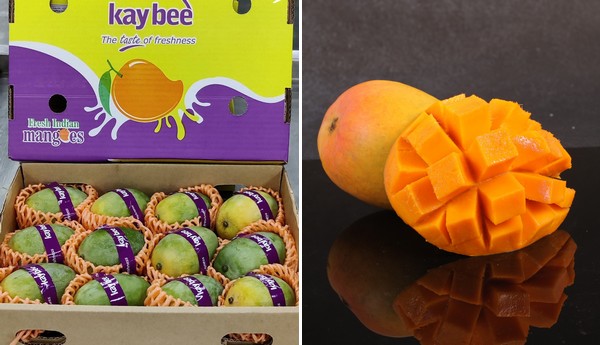 Irradiation is a quarantine treatment that Khakhar says is increasingly being used around the world because it is safe for consumers and gentle on fruits as well. For Indian mangoes, a target dose of 400 Gy is mandatory. The USDA has approved three irradiation plants in India.

With this move, Khakhar believes the fruit will meet strong demand in the US “Indian mangoes are selling for 3-4 times the normal mango price. They are flown in and undergo expensive processing,” he says. “The Indian population in the United States is quite large and it is one of the wealthiest communities in the United States. There’s a lot of ability to pay big bucks for a good mango. The key point is to ensure top quality commensurate with the highest price Indian mangoes command.